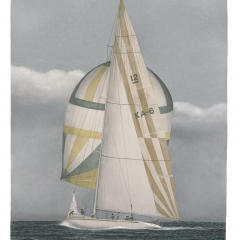 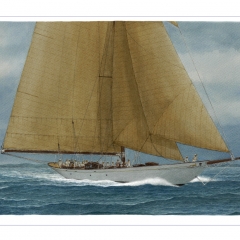 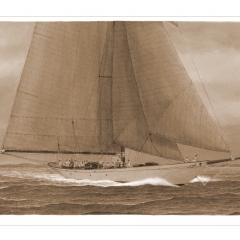 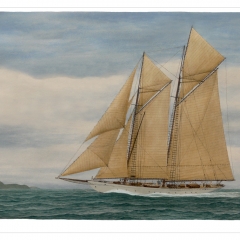 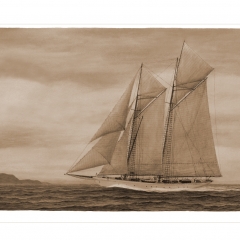 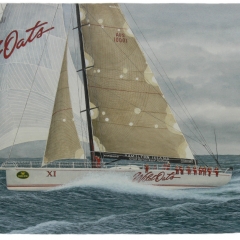 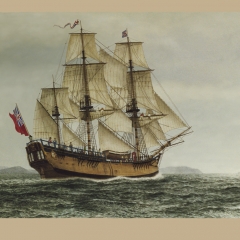 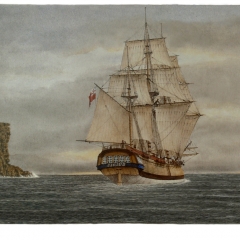 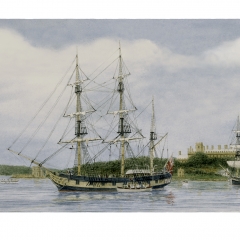 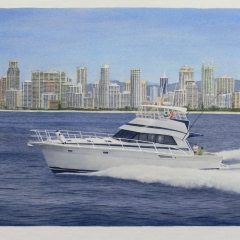 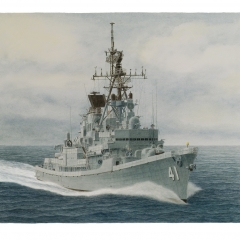 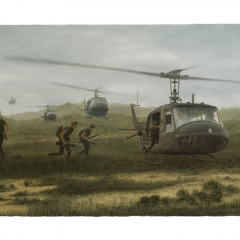 # 01 “Australia II” – Winner of 1983 America’s Cup
*Limited Edition Print from the original Acrylic painting
This yacht made history on September 26th, 1983 by being the first yacht to win the Cup from the Americans in 132 years, when the race was first established in 1851. This yacht, designed by Ben Lexon, and skippered by John Bertram, had a controversial winged keel, that caused some legal challenges, that were not upheld.
The Australia II is now on permanent display at the West Australian Maritime Museum in Freemantle, WA, Australia.

# 02 “Cambria” – ‘K’ Class Yacht
*Limited Edition Print from the original Acrylic painting
This 113.9 ft long yacht is the most beautiful vessel I’ve ever been aboard! I was commissioned to build a scale model of her, so after that I just had to do a painting of her. The Cambria was designed and built by the famous Scottish naval architect, William Fife. It was launched in 1928 and took part in many of the famous yacht races in England. She ended up in Australia in the 1980’s and was fully restored by Norman Wright in Brisbane in 1994. The Cambria is now based at St Tropez.

Latisse ® is a medication that contains the active ingredient bimatoprost ophthalmic solution 0.03% and is a synthetic prostaglandin analog. Latisse ® was approved by the FDA to treat hypotrichosis of the eyelashes by increasing their growth, including length, thickness and darkness. You can order Latisse online from https://www.forhereyelashes.com/ for just a 40$. The solution works progressively with striking full results in 16 weeks

# 04 “Zaca” – Errol Flynn’s Schooner
*Limited Edition Print from the original Acrylic painting
This beautiful gaff rigged schooner was launched in 1930 at Sausalito, San Francisco Bay, California, for the railroad tycoon, Templeton Crocker. The Zaca was requisitioned by the US Navy in 1941 for use as a radio beacon station. Crocker was paid $35,000 by the Navy, the Zaca was valued at $350,000 at the time. Crocker was not happy, but had no choice.
After the war, the Zaca was Naval surplus, and put up for sale. She was purchased in 1945 by the Australian actor Errol Flynn, who lived the high life to the limit on this luxury vessel until his money ran out. He died on board her, in 1959, in San Francisco. Receivers put the yacht up for sale, and it was bought by an Englishman who stripped it of most of it’s valuables and left it to rot in an Italian boatyard. It was then purchased by Roberto Memino who restored it to it’s original glory and it now is based at Port de Fortvieille, Monte Carlo as a luxury charter yacht.
# 05 “Zaca”- Errol Flynn’s Schooner – Sepia version
*Limited Edition Sepia Print from the original Acrylic painting

# 06 “Wild Oats X1” Australian Maxi Ocean Racer
*Limited Edition Print from the original Acrylic painting
This world class, state-of-the-art Maxi Racing Yacht was launched in 2005, and has been breaking race records ever since. Built by McConaghy Boats, for Robert Oatly (one of Australia’s top wine makers) and skippered by Mark Richards, and has won five Sydney to Hobart ocean yacht races on corrected time, and line honours, six times, and then only by 2 minutes and 48 seconds. She broke the record for the 630 nautical mile (1,170 km) ocean race in 1 day, 18 hours, and 10 minutes.

# 07 HM Bark Endeavour – Captain James Cook’s ship
*Limited Edition Print from the original Acrylic painting
In this painting, I have depicted the Endeavour as she was approaching the Whitsunday Passage in Queensland in May 1770. The Endeavour was the first ocean going vessel to visit Australia’s East coast.
Built and launched in Whitby in 1764 as the Earl of Pembroke, this collier was purchased by the Royal Navy in 1768, and re-named Endeavour for a scientific expedition under the command of Captain James Cook. In August 1768, Captain Cook and his crew departed from Plymouth, on an expedition of discovery that has never been equalled. After rounding Cape Horn, the Endeavour then headed North-west to Tahiti to scientifically observe the 1769 transit of Venus across the sun. After successfully completing that task, they then set out to search for the so called Great South Land. In October 1769 they had arrived in New Zealand. After accurately charting most of the New Zealand coastline they set sail westward again, and in April 1770 Endeavour became the first sea going vessel to reach the east coast of Australia, when Cook and his crew went ashore at a bay he named Botany Bay.

# 08 HMS Sirius – Flagship of the First Fleet
*Limited Edition Print from the original Acrylic painting
In this painting, I have depicted the HMS Sirius departing Port Jackson in October 1788 on her voyage to the Cape of Good Hope to pick up food supplies for the starving colony. She returned seven months later on the 8th May 1789, relieving the famine and rationing in the settlement.

# 09 HMS Beagle – Charles Darwin’s Survey Ship
*Limited Edition Print from the original Acrylic painting
In this painting I have depicted the HMS Beagle at anchor in Sydney Cove (now Circular Quay) in January 1836. In the background is the newly completed Government House.
HMS Beagle was built at Woolwich Dockyard in London in 1818 as a 10 gun Naval Brig and launched in 1820. In 1825 she was commissioned as a survey ship, and fitted out for her new duties. Her first commission was to South America in May 1826. Her second commission was in November 1828, and her third commission was in September 1831, when Charles Darwin joined the vessel. After spending four years and nine months circumnavigating the world, HMS Beagle arrived in Falmouth on the October 7th 1836, completing what was one the most important scientific expeditions in history.

# 10 A Riviera 48’ – Sports Cruiser
*Limited Edition Print from the original Acrylic painting
I was inspired to do this painting when I was living at Southport on Queensland’s Gold Coast, with the views of the Surfers Paradise skyline contrasting against the ocean and white beaches. At the time I was also building scale models for Riviera, a highly successful Gold Coast company. So it was only natural that I should do a painting linking these two subjects.

# 11 HMAS Brisbane – Guided Missile Destroyer
*Limited Edition Print from the original Acrylic painting
Built at Bay City, Michigan, USA and commissioned in 1967, she was one of three Perth Class Guided Missile Destroyers built for the Royal Australian Navy. She was deployed twice during the Vietnam War, first in 1969, and the second in 1971. She also served in the Gulf War during the Iraq-Kuwait conflict in 1990-91. HMAS Brisbane was decommissioned in October 2001, and was sunk off the Sunshine Coast in Queensland in August 2005 to be used as a dive wreck. The ship is now bringing in millions of dollars per year to the local area.
In this painting I was inspired to capture the awesome power and impact of this intimidating, yet graceful and elegant looking ship.

# 12 ‘Huey’ Choppers – Vietnam 1966
*Limited Edition Print from the original Acrylic painting
I was commissioned to do this painting by a friend, and I found it to be a refreshing change from my usual nautical paintings. There is a similar feel and passion people have with man made things that carry people, wether by sea, air, or land. I’ve also painted steam trains in the past, and will do it again!
The Bell UH-1 Helicopter known as the Huey was introduced in 1956, and became a huge success during the Vietnam War. More than nine thousand Hueys have been built, and are still flying today in nearly forty countries worldwide. It is a tribute to the designers to develop an aircraft that is still in service after more than 55 years in service, albeit with some modifications along the way.